Exclusive Live Casino Bonus:
Up to $/€500 On Your 1st Deposit
2 games
5.0 rating
5.0
T&Cs Apply
No Deposit Offer: New players only • £88 is granted in FreePlay (FP) • FP must be claimed within 48 hrs of receiving the email and expires after 14 days • FP wins are credited as bonus and capped at £15, exc. JP win • Special Offer: £20 min deposit • 200% up to £300 Bonus • Bonus wins are capped at £500 • To withdraw bonus & related wins, wager 50 x (bonus amount) within 21 days • Restrictions apply to deposit until wagering requirement fulfilled • Wagering req. vary by game • This offer may not be combined with any other offer
Play Now Read Review

QR codes, with their specific black and white square pattern, used to be considered a bit strange when they were first introduced as a payment system back in 2011. However, this iconic visual element is what makes them memorable. QR code payment is a contactless mobile payment method. The payment is made by scanning the code from a mobile phone.

To be able to scan the code, you need to have a smartphone and a specific app that can perform this action. Today there are numerous QR scanner apps you can download for free.

This is one of the alternative financial solutions. The aim is to speed up transactions and offload the merchants from lots of PoS hardware necessary to process payments from credit and debit cards (payment terminals).

This method is straightforward. When the client wants to make a purchase using this system, the only thing he needs to do is scan the displayed code with the phone. Afterwards he enters the amount he wants to pay and submit to finish the purchase.

The QR payment method was introduced in 2011 by Chinese company Alipay. Even though the origin of the code goes back to 1994, when it was invented for the Japanese automotive industry. The service was developed to help retailers (Alipay partners) accept payments by scanning a single QR code in Alipay Wallet. 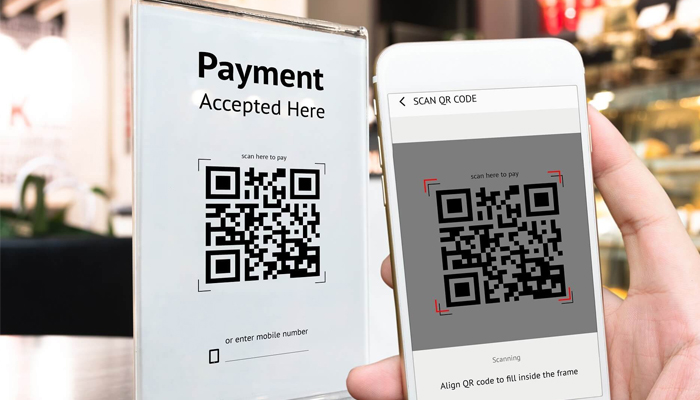 In 2014, another Chinese tech giant, Tencent, introduced a similar feature within its chat app WeChat. WeChat Pay facilitates mobile payments for its clients.

Nowadays, in-store mobile transactions are quite common and can be done in two ways, via NFC or QR code payments. NFC is a wireless data transfer that enables contactless payments. Even though NFC is on the rise, the main impediments to accepting this financial technology are lack of NFC PoS-terminals and the fact that not everyone owns a high-end smartphone.

Compared to NFC, which entails high overheads, QR payment codes are cost-effective and have, therefore, quickly become widely accepted. Everyone has at least once seen a QR code on a product packaging, in a store, newspaper, on a website, etc. However, this method is slowly but steadily gaining traction, especially in Asia.

How to Deposit via QR Code Payment?

To make a deposit, first, you have to find the live casino that offers this depositing method. Once you’ve found the one, you only need two things: a smartphone and a mobile payment app that includes QR code scanning. Then, just scan the 2D barcode and authorize it to finalize this transaction.

How to Withdraw with QR Code Payment?

Like some other “unusual” payment methods, prepaid cards and vouchers, for example, you will have to find another way to withdraw the money from your gambling account safely.

QR code payment, as on the spot transaction method, enables instant mobile payment. The processing of these transactions can be speedy compared to other methods. The only thing the user has to do is open his mobile payment app that features a QR code scanner, and scan this black-and-white matrix! Once done, he needs to verify the transaction, which is usually done in seconds.

This is an extremely secure payment method, as all the data transferred via the codes are encrypted, which minimizes possible security issues.