Not all software providers run their business in the same way. Some directly appeal to the crowd. That way, they become a brand that players will seek out no matter where they go. Other developers opt for a B2B approach. Their products are aimed at other software providers and white label providers. While not as glamorous, it is a safer approach. Super Spade has become a successful company with a wide range of live casino games because of that strategy. Quite an impressive feat, considering the studio’s leadership founded the developer in 2016!

Since then, the software provider continued to play to its strengths: innovation and speed. Super Spade does a great job of launching new games quickly. They are also not afraid of thinking outside of the box for game ideas. That has led the team to launch new releases you rarely see among other developers. What kind of experience awaits you if you choose to play their titles? Read on to find out!

One of the core tenets for Super Spade is innovation. The desire to offer new games to a market, showing the world they are not just another developer. One glance at the company’s game library shows their ambition goes beyond live blackjack, live baccarat, and live roulette. It offers popular Indian live games such as Andar Bahar and Teen Patti. Casino members can also enjoy less represented releases such as Casino War and Three Card Poker. The only things missing from their game list are live dealer game shows and Asian games. 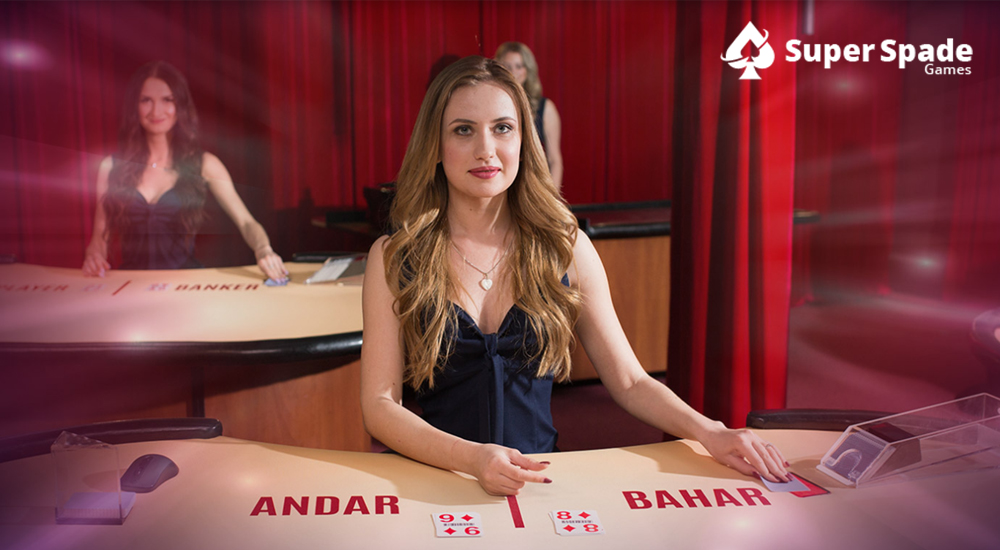 The company also offers players the option to play multi-table. The system is different compared to how other software providers make it. To keep casino members from getting overwhelmed, they can play a maximum of three games simultaneously in a single window. This allows you to swap the video feed between the three titles while the game displays results in real time. We find this to be a very convenient way to play multiple tables. We cannot wait to see how Super Spade plans to improve it going forward.

Our first time launching one of their games was a bit overwhelming. The company gives you plenty of windows that relay information. However, you can click or tap on most to make them disappear until you need them again. While not the cleanest user interface we have seen, Super Spade makes up for it in functionality. The lobby displays the current dealer and the results of previous rounds. Before launching a title, you can also set the table limit from the lobby page.

While their studio is based in Europe, the company has a global reach. Because of how diverse their games are, players from all over the globe are willing to try them. It helps Super Spade have complete control over their studio’s space. We doubt the developer could launch new games and innovative ideas nearly as quickly if the team considered other factors.

Super Spade always has something new up its sleeve. Part of the reason the company became popular among players stems from its diverse range of games. This software provider has it all. If you want to stick to live blackjack, live baccarat, and live roulette? This developer has you covered? Do you want to experience fun variants or exciting live dealer games from India? Super Spade offers those, too! It also provides a unique multi-table game that allows you to play up to three live dealer games simultaneously.

Atmosphere and immersion are a big deal for this company. The developer designed each game to recreate a brick-and-mortar casino feeling. The team wisely keeps a uniform look across all of its releases. Andar Bahar, Roulette, and Dragon Tiger feature the same color scheme and eye-catching design. That way, swapping between different releases feels like you are wandering between tables in an actual casino.

The developer found a fine line between attractive and informative when designing the user interface. The UI makes it clear how much you bet, how often each wager won, and the variety of playable stakes. However, you can hide all of these elements until you want to look at them again. That way, casino members can focus on playing the game and enjoying the experience. Players can also swap video quality from HD to SD within the release. Useful if your internet is slow and you want to avoid choppy gameplay.

All Super Spade’s hosts are taught to be as professional as possible. They will announce results and betting times. However, they do not interact with casino members outside of that. That is an excellent approach if you just want to focus on the game.

You cannot succeed in the live dealer space without excellent support for mobile devices. Fortunately for us, Super Spade games play without a hitch on both iOS and Android. Your tablets and smartphones are just as effective at running these releases as computers and laptops are. Thanks to that, players can play on whatever device they are most comfortable on.

Super Spade should be on your radar if you want a diverse selection of games. It features classics such as blackjack, baccarat, and roulette. However, the developer is also home to exotic titles that are hard to find otherwise. It is a shame the developer is somewhat hard to find. We do not doubt the software provider would be more popular if it were available in more casinos. Add multi-table to the mix, and Super Spade has serious potential to be a top-tier developer.