Few developers have left the same impact on live casinos as Playtech has. The developer has always been at the forefront of new and exciting games. Now, they are bringing us yet another treat! A game show that we feel will shoot up everyone’s list of favourites when it becomes available in their casinos. 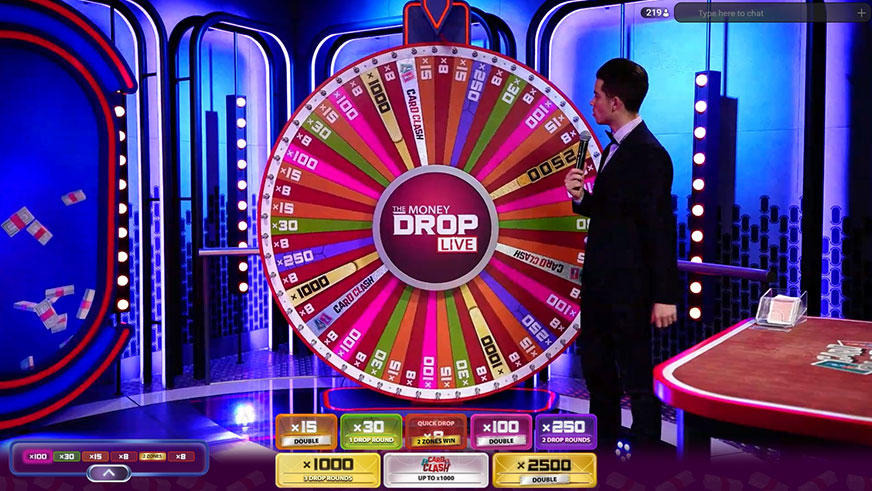 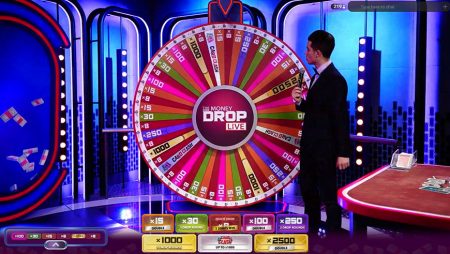 Money Drop Live is the latest product of the recently extended collaboration between Playtech and Endemol Shine Studios. This was something we were looking forward to ever since the 2020 announcement was made. Now that we finally have our hands on the game? We can say it was worth the wait.

Playtech’s Money Drop Live is reminiscent of the British TV show called the 100k Drop. The game is played on a large wheel with fifty-four sectors. Fifty-one of those sectors contain multipliers, which players can bet on. The other three grant access to the Card Clash round. Each round begins with the host spinning the wheel. If a multiplier value you bet on is drawn, you win the appropriate sum.

This is where Playtech’s release is different from other games. Winning is easy. Keeping those wins is not! After a win is granted, you are taken to the Money Drop game round. Here, you will find four platforms, labelled A, B, C and D. You can place your winnings on any of these four platforms as you like. You can split them evenly; place everything on one, whatever you like.

After a few seconds, three platforms will drop, and any money placed on them will be lost. Money remaining on the last platform is kept. Depending on what bet you played, you will either win those funds or need to play more Money Drop rounds. Once all Money Drops are played, that particular game round ends and a new one begins.

There are multiple wagers you can play in this live casino game. Each bet comes with a multiplier cash prize you will win if it is drawn on the wheel. However, each wager also tells you how many Money Drop rounds you need to play to keep your wins. The bigger the prize, the more Money Drop rounds have to be played.

Before Money Drop rounds are played, some multipliers will be randomly doubled. There is also a chance for the 8x Quick Drop bet to receive a second safe zone to place money on.

Card Clash is won if you bet money on that wheel segment and it is drawn. This bonus round takes place on a separate table. Each Card Clash round is played with a freshly shuffled 52 card deck. Players pick either the blue or the pink playing position. The dealer deals one card to both positions. The side with the higher value card wins and receives a multiplier for that position.

This special feature has three rounds. After all three rounds are played, you receive an appropriate cash prize depending on the results. One win pays 5x, two wins pay 15x and three wins pay 95x. If your position does not win once, then you lose. However, if all three rounds end in a tie, you win a 1000x cash prize.